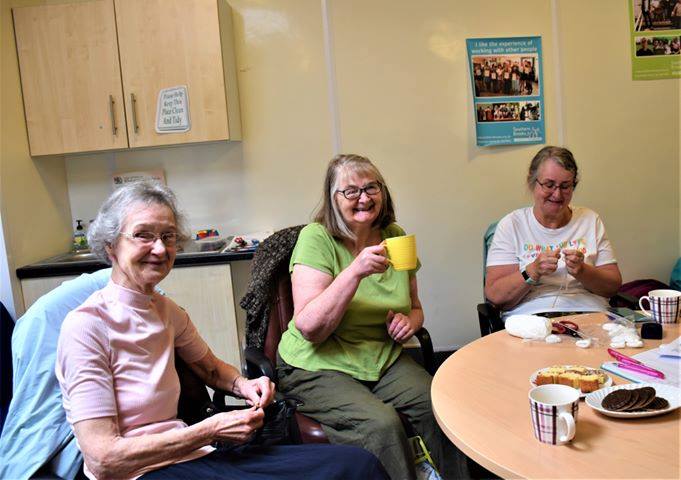 “There are no strangers here just friends we haven’t met yet!”

For the last year we have been having community building conversations in Cranleigh Court asking local people what they would like to see in their neighbourhood and how they could contribute. The purpose of this is to build a stronger community by people getting to know each other and organising local activities. From these converstaions the Cranleigh Court Coffee Group began.

We have been talking to residents for over a year and during this time we met four residents who talked about creating a space where neighbours could meet. Mike, Catalin, Barry and Brian were connected because they shared a similar interest. They were neighbours but hadn’t ever met each other before, except Mike and Barry who were used to work together. These are the local people behind the Coffee Group. Mike also had an idea of supporting his more elderly and less able neighbours by offering them transport assistance to and from the gorup. What an awesome bunch of people!

Here is what people who come to the Coffee Group have to say:

“Coming from Wales I’m used to greeting people and always having conversation with neighbours but it seems to be quiet here. It is a wonderful thing [the Coffee Group] that we are doing. Somewhere to come and chat and have fun!” Karolyn

“I like helping my neighbours and offering companionship especially elderly neighbours who are house bound.” Mike

“When you are retired and lonely yourself it is difficult to socialise. You are made very welcome here by everyone and it’s easy to become one of the group. It is very interesting to hear about other things people do and learn new skills.” Barbara

“He [Catalin] loves coming to the group. He brought his birthday cake to share with everyone. In our home country, Romania, he was isolated and treated like a pariah but here he is treated nice regardless of his communication difficulty. He wants to please everyone and be part of the group and community. It is very important to him.” Teodora

The group members have also designed and distributed their own flyers to promote the group throughout the community. They have organised events to promote the group such as a grow your own day and the Buss Stop Chat where they had a stall by the bus station at Yate Shopping Centre and engaged with passers by. The group is thriving and achieving its goals of connecting people in Yate and building a stronger community. If you would like to get involved please contact Sato on 07971 670880 or satoblack@southernbrooks.org.uk.